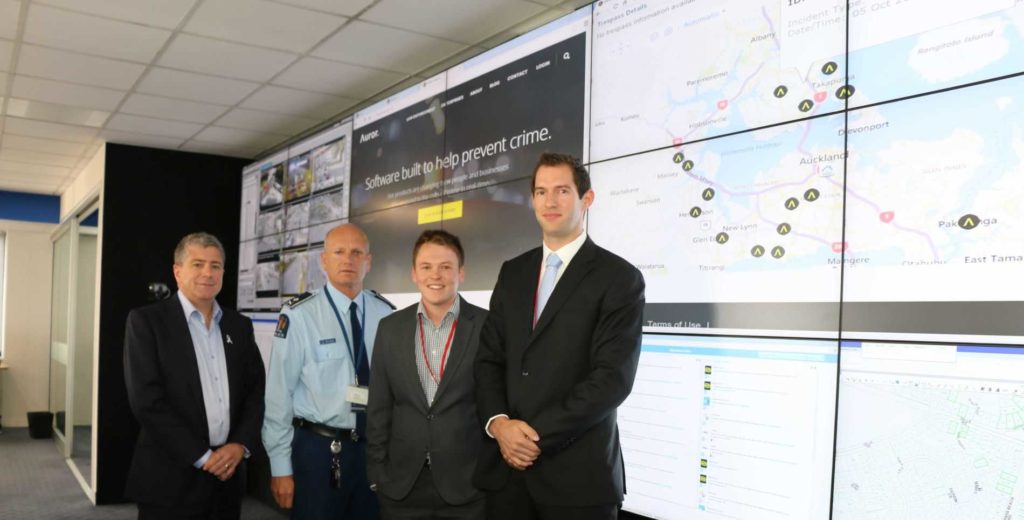 Operating out of Auckland, Auror is a software startup company transforming the way police and communities prevent and solve crime in real-time.  Using a world-leading, cloud-based crime reporting software platform, Auror enables businesses to complete incident reports in minutes and provide relevant information about high volume crime to the Police and other nearby stores.

Phil Thomson, co-founder and CEO of Auror, chatted to us about Auror’s journey, their recent capital raise, and their experience working with Simmonds Stewart.

The concept behind Auror was first developed about four years ago when the founders saw a newspaper article and discovered that retail theft costs New Zealand nearly $2 million a day.  Phil recalled that we had been looking to create a company that could help solve a social issue, and realised that there was a massive opportunity to use technology to affect meaningful change in reducing crime and boosting community safety.

The Auror team built a cloud-based software platform that allows businesses to quickly report a crime to the Police, reducing the average crime reporting time from 90 minutes to less than 10.  Stores nearby to crime incidents are also alerted and informed about the specifics of incidents in their area.

Phil has since seen the difference that Auror can affect by making it easy for businesses to report crime, and for Police on the ground to get real-time information on their digital devices that they can act on and make communities safer.

In early 2013, Auror (then branded as Eyedentify) had reached the point where it needed the full-time attention of its founders.  Phil and Tom Batterbury (co-founder and Head of Product), quit their day jobs and began a trial with a major retailer in 30 sites across Auckland, working in conjunction with the Counties Manukau Police.

Auror has since gone on to sign a national partnership agreement with the entire New Zealand Police force to make its platform available to all officers, and its Kiwi customers now include supermarkets, petrol stations, and sports and homeware stores, among others.  The company is also targeting the Australian market where it is in discussions with state and federal police, and has several pilots underway with major multi-site businesses.

Phil told Simmonds Stewart that his biggest challenge has been deciding how to best allocate our resources when there are 1,001 things to do in a startup.  We can’t do everything at once and have had to make some big calls in order to prioritise workstreams and focus on the critical aspects of the business.

In response to this resource crunch, Auror engaged Simmonds Stewart in mid-2015 to assist in the negotiation and completion of a $1 million funding round with big name investors, including Sam Morgan, K1W1 (a venture capital fund run by Sir Stephen Tindall), and Reinventure (the Australian venture capital arm of Westpac).

In his former life as an IP lawyer, Phil had worked with Simmonds Stewart partner Averill Dickson.  When it was time to get legal help with his capital raise he knew Simmonds Stewart’s track record and was confident that we would be in good and capable hands.

Capital raising can be a time consuming and high friction activity for startups, so Auror was conscious that it needed a firm that is focused on achieving outcomes, rather than being overly ‘lawyerly’.  We wanted someone who would give us direct and honest commercial advice about what was in our best interest.

Simmonds Stewart was able to help with the efficient negotiation, documentation, and completion of the investment.  Phil found that having Simmonds Stewart speaking on our behalf meant that we were able to capture the full value of the deal and not put ourselves in uncomfortable situations with our investors.  At the end of the day, we wanted expert advice, and that’s what we got.

Auror was publicly recognised when the leadership team were named NZ Young Innovators of the Year  at the 2015 New Zealand Innovators Awards.  They have also demonstrated the ability to attract investment from high profile New Zealand and Australian investors.

As a final point, Phil noted that it is critical to find a legal partner that actually understands your company, as not all lawyers will take the time to get to know their client’s business.  I liked that Simmonds Stewart is focused on assisting technology and startup businesses, and felt that they were a great culture fit.

Auror is an emerging NZ success story and Simmonds Stewart will closely follow their continued success in making our communities safer.